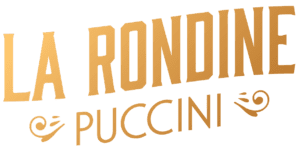 Paris, the 1920s. The wealthy Rambaldo and his mistress, Magda, are entertaining theatrical and literary friends. Prunier, a poet and the lover of Magda’s maid, Lisette, declares that romantic love is back in fashion. No one except Magda takes him seriously. When Prunier sings a ballad he has written about a girl who rejects the love of a king, Magda sits at the piano and finishes the song, making up a second verse that tells how the girl falls in love with a student (“Chi il bel sogno di Doretta”). She thinks about her own flirtations and recalls an encounter with a young man at Bullier’s restaurant. Rambaldo says he knows what love means and gives Magda a pearl necklace, which she accepts without changing her opinion that love has nothing to do wealth. Prunier offers to read Magda’s palm and predicts that she will go south in pursuit of romance and happiness, just like “la rondine,” the swallow. Rambaldo introduces a visitor, Ruggero, the son of a childhood friend, who is new to Paris and wants to know where to spend the evening. They decide on Bullier’s, and Ruggero leaves to go there. Lisette, flirting with Prunier, tells him that it is her night off and the two follow Ruggero. As the guests depart, Magda decides to remain at home, then changes her mind. She dresses as a shop girl and leaves, confident that no one will recognize her, and ready for an adventure at the restaurant.

Bullier’s restaurant is alive with a crowd of artists, students, and young women. Ruggero sits alone at a table. When Magda enters, several young men approach her, but she says she already has a date and joins Ruggero. He doesn’t recognize her. She introduces herself as Paulette. When she teases him about his probable love affairs, he replies that should he ever love a woman, it would be forever. While they talk and dance, they both realize that they have fallen in love with each other. Prunier and Lisette arrive. She is startled by the sight of Magda, but Prunier, understanding the situation, convinces her that it is someone else with a chance resemblance. Suddenly Rambaldo appears, and Prunier asks Lisette to keep Ruggero out of sight. Rambaldo demands an explanation for her escapade from Magda. She replies that she has found true love and is going to leave him. Rambaldo bows ironically, expressing hope that she will not regret it. Ruggero returns and Magda leaves with him to start a new life.

Magda and Ruggero have been living in a villa on the Riviera, but their money is running out. Ruggero says he has written to his mother for her consent to their marriage and paints an idyllic picture of his family’s home in the country. Madga is dismayed that her lover doesn’t know anything of her past. After he has left, Prunier and Lisette arrive, quarreling: he had tried to make her a singer but her debut was a disaster. Magda tells Lisette she would be glad to take her into service once more. Prunier, who can’t imagine Magda continuing her fantasy life, delivers a message from Rambaldo: he is ready to welcome her back on any terms. Prunier leaves as Ruggero returns with a letter from his mother, who is delighted that her son has found a good and virtuous bride. Heartbroken, Magda confesses that she can be his mistress but never his wife. He insists he loves her anyway, but she says she will not ruin his future. Leaving the devastated Ruggero behind, she turns away to go back to her old life.