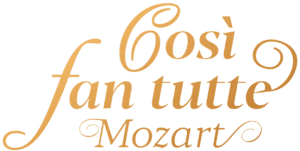 Fiordiligi and Dorabella are singing the praises of Guglielmo and Ferrando when Don Alfonso arrives to tell them that their betrothed must immediately depart for the battlefield. The young men arrive and the two couples bid each other a tearful farewell. Despina, hostess at Alfonso’s Resort – (acting as the sisters’ maid), is preparing their breakfast when Fiordiligi and Dorabella enter lamenting the departure. She counsels them to amuse themselves while their lovers are away, advice that horrifies them. After the sisters leave, Despina admits two suitors (the disguised Guglielmo and Ferrando) into the house. Fiordiligi and Dorabella are alarmed to find two strange men in their home and become ever more alarmed when the two men begin courting them. Alfonso pretends the men are old friends of his and begs the sisters to accept them. But Fiordiligi staunchly swears fidelity to her absent Guglielmo.

The sisters are lamenting the departure of their fiancés when the two ‘strangers’ barge in and swallow what seems to be poison. When they collapse, Despina and Alfonso go in search of a doctor, leaving Fiordiligi and Dorabella to tend to the apparently dying strangers. A doctor (Despina in disguise) arrives to revive the two afflicted suitors. As they recover, they vow their love to the vexed sisters with even greater passion, while Alfonso and Despina try to hide their amusement.

Fiordiligi and Dorabella are persuaded by Despina that there would be no harm in a bit of innocent flirtation. Dorabella chooses the disguised Guglielmo while Fiordiligi chooses Ferrando.

The suitors serenade the two sisters. Fiordiligi goes off for a stroll with Ferrando while Guglielmo courts Dorabella. To his amazement, Dorabella surrenders rather easily. As they go off together, Ferrando returns with Fiordiligi, who continues to resist him and leaves. When the two young men exchange news of their progress, Ferrando is stricken to learn that his faithless Dorabella has yielded to Guglielmo.

While Alfonso and Guglielmo covertly look on, Ferrando makes another attempt to break Fiordiligi’s tenacity. To Guglielmo’s distress, she too finally yields. He tries to console the two young men with his motto: ‘così fan tutte’ (‘all women are like that’).

The sisters’ double-wedding to their two suitors is proceeding when a military chorus in the distance signals the ‘return’ of Ferrando and Guglielmo from battle. The suitors and the notary (again Despina in disguise) hide. A moment later Ferrando and Guglielmo appear in uniform, feigning surprise at the cool reception they receive. When they discover the marriage contract and the notary, they swear vengeance on their faithless fiancées and their suitors. Finally, they reveal their ruse and the two pairs of lovers are reconciled. Or are they?

Così fan tutte, ossia La scuola degli amanti (All Women Do It, or The School for Lovers), K. 588, is an opera buffa in two acts by Wolfgang Amadeus Mozart. It was first performed on 26 January 1790 at the Burgtheater in Vienna, Austria. The libretto was written by Lorenzo Da Ponte who also wrote Le nozze de Figaro and Don Giovanni. The opera takes place in the Bay of Naples in the 18th century. Deeply convinced of women’s infidelity, the cynical Don Alfonso provokes his young friends Ferrando and Guglielmo by impugning the constancy of their fiancées, sisters Dorabella and Fiordiligi. To prove his assertion, Alfonso proposes the following plan to them: that they tell their fiancées they are leaving for war, and then return dressed as Albanian soldiers, ready to do anything to seduce the lonely fiancées. This turns into a wacky farce.

Although it is commonly held that Così fan tutte was written and composed at the suggestion of the Emperor Joseph II, this is unlikely as there is evidence that Mozart’s contemporary Antonio Salieri tried to set the libretto but left it unfinished.

The short title, Così fan tutte, literally means “So do they all”, using the feminine plural (tutte) to indicate women. It is usually translated into English as “Women are like that”. The words are sung by the three men in act 2 just before the finale.

The opera was given only five times before the run was stopped by the death of the Emperor Joseph II and the resulting period of court mourning. It was performed twice in June 1790, and again in July (twice) and August (once). After that it was not performed in Vienna during Mozart’s lifetime.

Così fan tutte was not performed in the United States until 1922.

Knowing her idiosyncratic tendency to drop her chin on low notes and throw back her head on high ones, Mozart filled her showpiece aria “Come scoglio” with constant leaps from low to high and high to low in order to make Ferrarese’s head “bob like a chicken” onstage.

The subject matter did not offend Viennese sensibilities of the time, but in the 19th and early 20th centuries it was considered risqué, vulgar, and even immoral. The opera was rarely performed, and when it did appear it was presented in one of several expurgated versions. After World War II it regained a place in the standard operatic repertoire and is now frequently

Wolfgang Amadeus Mozart (27 January 1756 – 5 December 1791), baptised as Joannes Chrysostomus Wolfgangus Theophilus Mozart, was a prolific and influential composer of the Classical Period. Despite his short life, his rapid pace of composition resulted in more than 800 works of virtually every genre of his time. Many of these compositions are acknowledged as pinnacles of the symphonic, concertante, chamber, operatic and choral repertoire. Mozart is considered among the greatest composers in the history of Western music, with music admired for its “melodic beauty, its formal elegance and its richness of harmony and texture”.

Born in Salzburg, Mozart showed prodigious ability from his earliest childhood. Already competent on keyboard and violin, he composed from the age of five and performed before European royalty. His father took him on a grand tour of Europe and then three trips to Italy. At 17, Mozart was engaged as a musician at the Salzburg court but grew restless and travelled in search of a better position.

While visiting Vienna in 1781, he was dismissed from his Salzburg position. He chose to stay in Vienna, where he achieved fame but little financial security. In 1784, Mozart became a Freemason. Freemasonry played an essential role in the remainder of Mozart’s life: he attended meetings, a number of his friends were Masons, and on various occasions, he composed Masonic music.

Despite the great success of his opera, Die Entfuhrung aus dem Serail in 1782, Mozart did little operatic writing for the next few years. He focused instead on his career as a piano soloist and writer of concertos. Around the end of 1785, Mozart moved away from keyboard writing and began his famous operatic collaboration with the Lorenzo Da Ponte. 1786 saw the successful premiere of The Marriage of Figaro in Vienna. The opera Don Giovanni premiered in 1787 to acclaim in Prague. The two are among Mozart’s most famous works and are mainstays of operatic repertoire today.

By mid-1788, Mozart began to borrow money, most often from his friend and fellow mason Puchberg. Many have suggested that Mozart was suffering from depression, and it seems his musical output slowed. Major works of the period include the last three symphonies and the last of the three Da Ponte operas, Cosi fan tutte.

Mozart’s financial situation, a source of anxiety in 1790, finally began to improve. It appears that wealthy patrons in Hungary and Amsterdam pledged annuities to Mozart in return for the occasional composition. He is thought to have benefited from the sale of dance music written in his role as Imperial chamber composer. Mozart no longer borrowed large sums from Puchberg and began to pay off his debts.

In September 1791, Mozart fell ill while in Prague for the premiere of his opera La clemenza di Tito, which was written in that same year. He continued his professional functions for some time and conducted the premiere of The Magic Flute on 30 September. By late November, his health had deteriorated to the point he became bedridden, suffering from swelling, pain, and vomiting. He died on 5 December and was buried in a common grave in Vienna – “common grave” refers to neither a communal grave nor a pauper’s grave, but an individual grave for a member of the common people which was subject to excavation after ten years.